Our website uses cookies to direct you to your local Lifewords site and remember your preferences.  Find out more
Accept
Home / Blog / Forum 2:19 – embracing diversity

In June English teaching and outreach organisation Forum 2:19 held their 10th annual gathering at Oak Hill College in London. The event welcomed more than 150 guests and exhibitors from churches and organisations across the UK, including Lifewords who has been resourcing Forum 2:19 with booklets for many years.

Forum 2:19 works with a number of churches to help resource them with ways to embrace diversity in their local communities. “Paul made it clear in Ephesians 2:19 that after Christ’s death and resurrection there were no longer foreigners or strangers,” says co-founder David Baldwin. “Barriers were broken down and we all became fellow citizens. So helping churches to become more aware of their communities, and sensitive to different cultures and nationalities is key.” 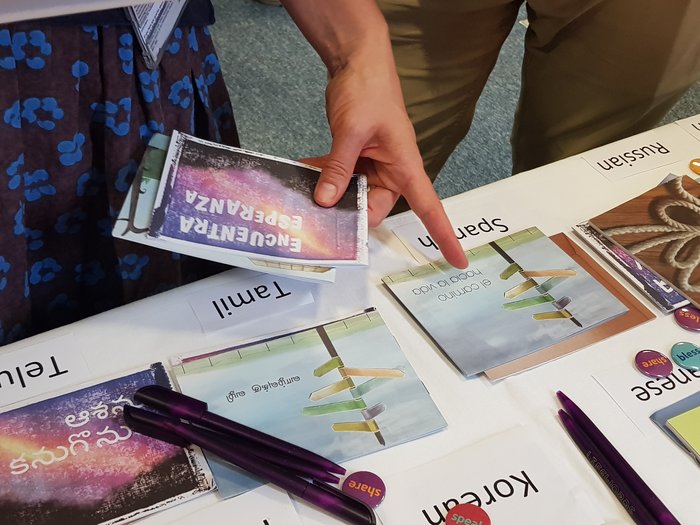 First starting as a small church-based ministry, they began to create opportunities in their local community to help connect with and engage internationals, such as setting up regular English classes. "We gradually noticed that other churches were doing this too and thought it was great," says David. "But then we thought about how awesome it would be if we all come together to share our resources, discuss challenges we face, and create new ideas. And that's how Forum 2:19 began." He continues: “I remember being introduced to Lifewords not long after we started. I was amazed at the range of languages they had; the simplicity, quality, accessibility and generosity. It’s incredible how relevant and included someone instantly feels when receiving something in their own language. This is part of the integration and social inclusion we need."

The event kicks off with a talk and presentation from Rob Prendergast, pastor of Ecclesia church in south-east London. He invites us to engage in open, honest conversation with those seated nearby. "What personal prejudices do you have?", he asks. "Think about times when a somewhat discriminatory thought might have crossed your mind. Perhaps in a supermarket, or being in an unfamiliar area, or being transferred through numerous staff members in a call centre." As the room falls silent, people begin to fidget nervously and voices start to quietly emerge admitting to moments of prejudice. After a few minutes Rob says, "Now think about times when you've felt alone. Isolated. Overlooked." Again the volume in the room drops and the atmosphere is coy as we continue opening up about our personal experiences. These group exercises certainly weren't expected, but they allow us to reflect on what it means to truly be a Christian. 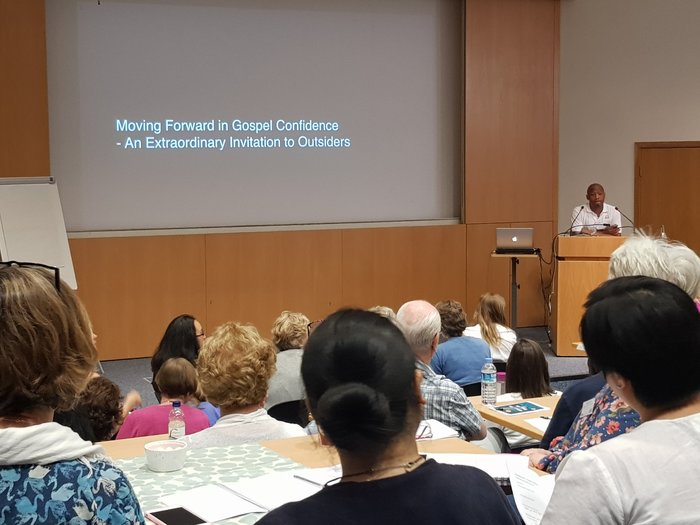 "My parents are Jamaican and were part of the Windrush generation," says Rob. "Although they were invited to Britain to help rebuild the country after WWII, they sometimes shared stories with me about feeling unwelcomed, forgotten, overlooked, or ignored. I wouldn’t want my children or their children to experience this, and that's why I always get excited about attending Forum 2:19. When it started in 2009 the members of the forum were only acutely aware of the difficulties that differences in language and culture can present when it comes to building relationships or sharing God’s Word. But now there are so many conversations, spaces and facilities opening up to help integrate one another, and differences are really being embraced. It's incredible."

From fear to freedom

The next part of the event consists of a series of small workshops based on social inclusion, literacy, working with older learners, integrating internationals in society through storytelling, and creating ways to experience the Bible as good news in their lives. Gill from Luton heads up a drop-in centre for women whose first language isn't English, and have usually travelled to Britain from conflict countries. "They're welcome to attend our English teaching clubs whenever they want to," says Gill. "Alongside studying, we often arrange local trips to places like the post office, supermarket, council and hospital to put what they're learning into practice. Many of them are petrified to catch a bus into town or to find out what services they're entitled to, because of how different life is for them here."

Gill creates opportunities for the women to learn about Jesus, 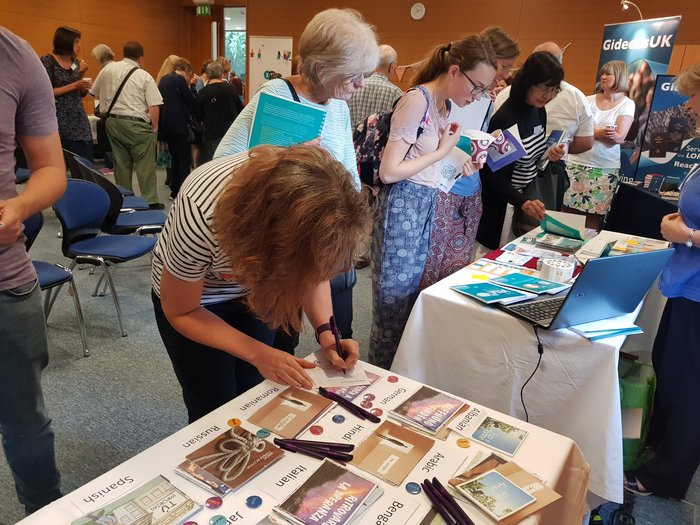 and also make friends at the same time. "We always include stories from the Bible in our classes," says Gill. "We respect that many of the women are from different religious backgrounds, and would never discuss subjects that make them feel uncomfortable, but they’re often so interested about the Bible stories and are happy for us to pray with them too. At the same time, we give them time to discuss what they've learned with other people in the class. In that moment, they are not only practising their English, but they're also exploring faith with God and forming new friendships with other women."

For Gill, witnessing each woman's journey and progression is rewarding. "One of my ladies arrived in the UK with her family from Afghanistan eight years ago. She knew very minimal English and was very dependent on us accompanying her to doctor's appointments and trips to the local council. One day I organised a trip for the women to visit the hospital after we had studied it in class. Shortly after the trip, she attended the drop-in centre and excitedly told us how she had visited the hospital on her own for the first time in eight years. It really puts into perspective how everyday things that some might take for granted are actually huge steps of freedom for others."

Women in the sex industry

Sherry Xu works with Tamar Westminster – an organisation that began in 2013 to provide hope for women working in the sex industry. "We work to reach and support women in Westminster and the City of London who are in the sex industry, and particularly those who are being trafficked," says Sherry. "In 2016 I joined as the Chinese outreach worker because the group had been encountering more and more Chinese women in places like massage parlours and were unable to access the help or support they needed due to language barriers."

Tamar is based in the heart of Westminster, which they describe to be 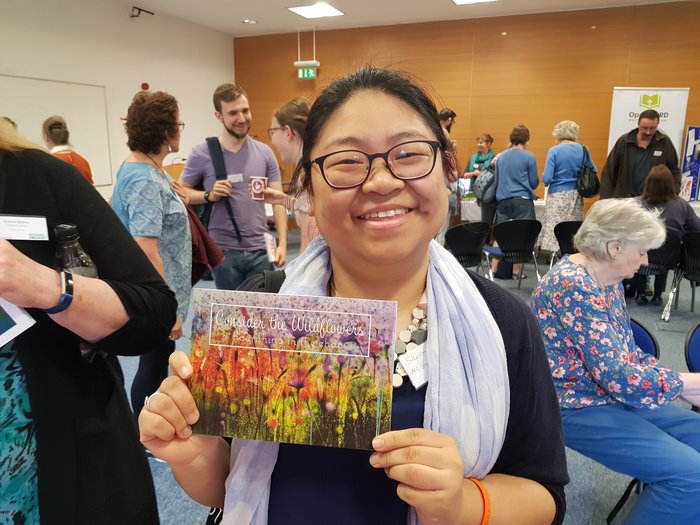 "a central London hotspot for sex-workers and trafficking networks" and say that girls and women "are often trafficked into the sex-trade from other countries, where they can quickly lose hope of anyone being able to reach them." Sherry says, "It's important for us to build trust with the women and grow friendships before sharing the gospel with them. Through our outreaches, personal follow-up, English lessons, prayer times, and more we're able to use those opportunities to provide physical, emotional, spiritual and mental support."

While wandering around the exhibitors' room, Sherry comes across the Lifewords stand. "I can't believe how many Bible resources there are in so many different languages. You even have Chinese! I'm really excited to share these with the women I've built relationships with. And for me, even though I have a good grasp of English, whenever I see something in my own language it instantly makes me feel at home, and as though I can truly connect with something. I love Consider the Wildflowers too. Having a Bible resource that relates to women in the sex industry is so needed. Thank you for working to produce it in more translations as well. Hopefully one day Chinese might be one of them!"

Looking to the future

As the day begins to wind down, laughs, resources, and contact details are exchanged between guests, workers, and exhibitors. “In collective spaces like this, we’re reminded of God’s heart for all people," says David. "It’s rewarding and enriching when meeting new people who don’t look or sound like you. God’s Word is worth sharing and God’s children are worth loving.” 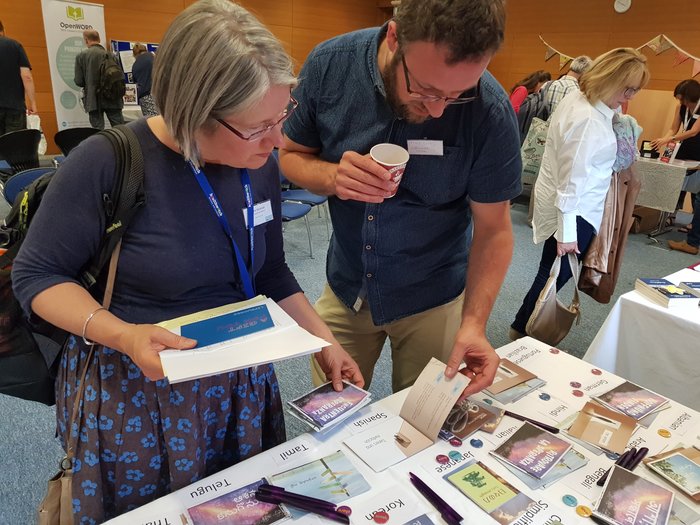 I ask David where he sees Forum 2:19 10 years from now. His answer compels me. "I hope that it ceases to exist," he says. "With so much talk about integration in the news, in the media, and among us at the moment, I hope that the time soon comes where differences will be irrelevant and people become naturally integrated into society. I hope churches especially will be more aware of and sensitive to different nationalities and look out for people on the margins. Sometimes we don't know where to start with embracing diversity because we're afraid of making mistakes, feeling awkward or causing offence. But I always encourage people to try. We're in a time where many people are searching for something deeper, and as Christians we have an exciting window to invite our communities into God's story."

On Saturday 16th June the Diocese of Rochester together with The Clewer Initiative, will be hosting a conference on modern slavery in the UK, with a particular emphasis on caring for and supporting the victims of this injustice.

Live it Out Loud

For the next few months VerseFirst are mixing things up with the arrival of Live it Out Loud – a campaign that is all about exploring, experiencing and living out the Bible.